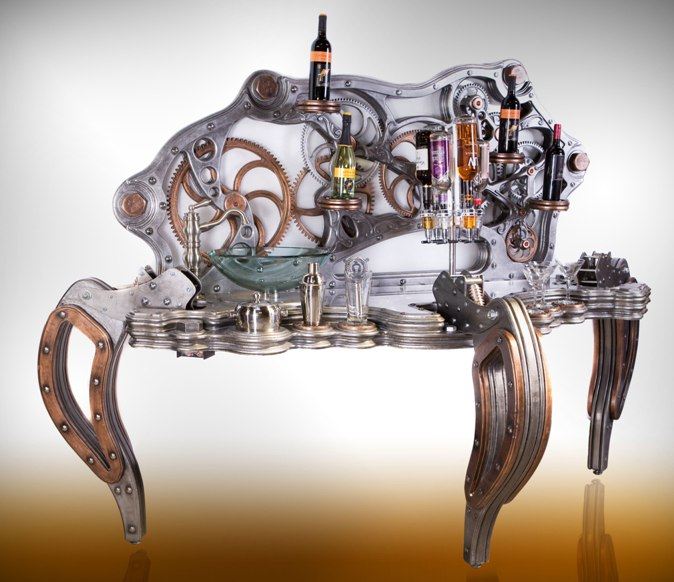 These are the things that can be found in the signature works of American artist Dale Mathis, who utilizes pistons and gears in order to create something both aesthetically pleasing and meaningful. Armed with the detail-oriented mind of a master watchmaker, the imagination of a surrealist, and the insatiable thirst to create stories in the form of mixed media sculptures, his art is able to provide a respite in the midst of a sometimes chaotic world by providing a sense of order within the confines of his work.

Whether it’s about a trying time in his life such as heartbreak, rejection, abuse, or providing modern reinterpretations of well-known works of art such as Michelangelo’s David or Salvador Dali’s The Persistence of Memory, or reimagining the solar system as a clock, Dale’s creativity and craftsmanship can be reflected in every aspect of his work.

Deriving inspiration from artists such as Joshua Johnson, Edmonia Lewis, and Edward M. Bannister not only for their art but also for their tenacity to succeed in a world that would not accept them or their works of art as serious contributions to the field, Dale also faced similar challenges as he worked hard to make a name for himself in the art scene. He was repeatedly rejected and underestimated, which only strengthened his resolve to succeed. After moving to Las Vegas, Nevada at the age of 19 and working a series of odd jobs as a construction worker and strip club bouncer, this self-taught artist eventually gained enough traction and was soon able to reach a wider market.

His work has been featured in galleries throughout the United States. He has also been showcased in various media outlets such as CBS, MTV, and HGTV, as well as in several publications such as Surface Magazine, LAart, and more.